A Summer Song – Chad and Jeremy

A Summer Song – Chad and Jeremy 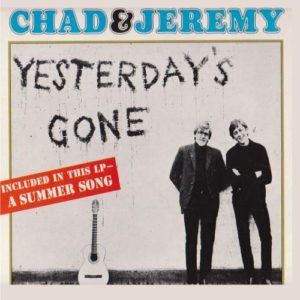 This is one of those songs that I listen to and I can’t really place where I’ve ever heard it in the past, but it feels like it has just always been there. “A Summer Song” is the 1964 summer song by British duo Chad & Jeremy.

The song sounds like a cross between Pete Seeger style folk and 50’s crooner songs with a very lush and romantic string arrangement. It’s a beautiful song with soft and perfectly blended vocal harmony. The string arrangement kicks in at the second verse. It’s one of those string arrangements that was orchestrated to just make your heart ache.

The story is the remembering of a love which bloomed in summer but had to end. Summer is a wonderful season which has been idealized and immortalized in movies like Grease and The Graduate. In this song the narrator experienced one of those idealized summers but he comes to the realization that it has just become a memory.

Even though the song has a twinge of sadness, it is a wonderful tune to get you into the mood to experience a magical summer.

Check out the “Summer” playlist I put together on Spotify: