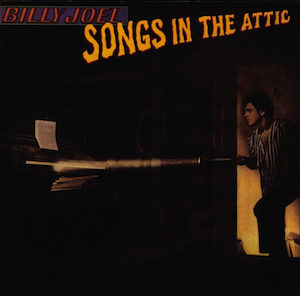 The summer after my freshman year of college was rough. I had decided to stay in Nashville which, in retrospect, was a terrible idea. I got a job selling tickets at the Frist Museum and lived in a tiny, tiny room with a few other girls who were essentially strangers. I am inclined to be a reserved person and it turns out that pretty much all of my friends went home for the summer so I spent a majority of my time that summer absolutely alone. About halfway through the summer I realized that I was probably suffering from some level of depression. I was starved for human interaction and felt like a ghost just going through life. I wasn’t very musically inspired and I would have just wasted away if school didn’t start again in the Fall. As bad as that summer was, I’m glad I had the experience of emotional depravity to have that feeling in my memory bank so I can avoid it in the future when it could be much more detrimental to my life.

Listening to “Summer, Highland Falls” always takes me back to that summer. Specifically, it makes me think about the journal that I kept those few months. This was probably one of the only times in my life that I actually kept up with a journal. I spent so little time conversing with other people and the only way I knew to get out my thoughts was to write them down. I cringe every time I go back to read that journal. I was questioning everything in my life. I became obsessed with finding interesting quotes from successful people that made me feel like I was growing intellectually in some way. I would write down the quotes in my notebook. There are pages and pages of all these completely random quotes that I wrote down. I really have no idea what I thought I would gain from that practice. But one of my favorites is this poem by R. Buckminster Fuller (the scientist):

“Radiation is plural and differentiable,
radiation is focusable, beamable, and self-sinusing,
it is interceptible, separatist, and biasable –
ergo, has shadowed voids and vulnerabilities;

Gravity is unit and undifferentiable
Gravity is comprehensive
inclusively embracing and permeative
is nonfocusable and shadowless,
and is omni-integrative
all of which characteristics of love.
Love is metaphysical gravity.”

I have absolutely no idea what that is supposed to mean, but something about it caught my attention. I think I just like cryptic messages that seem like they MUST point to some deeper meaning.

Anyway, back to the song. This was a song that I was obsessed with that summer. I listened to it a few times a day, mostly before I went to sleep. In fact, I would listen to it and sob as I fell asleep. Sad, right? Maybe actual depression. Who knows. I’ve always been a big Billy Joel fan, but this was one I hadn’t heard until that summer. My boyfriend would argue that it sounds like all Billy Joel songs, but I believe it has it’s own character. The cascading piano accompaniment throughout creates a trance like motion that binds me in it’s magical beam every time I listen to the song. In the first verse there’s a line, “and I believe there is a time for meditation in cathedrals of our own.” I’d say that this song is one of those personal cathedrals for me. Every time I listen to it, it causes me to think about where I was during that depressing summer a few years ago, how long it took me to pull myself out of that dark place and where I am now. It makes me evaluate the current state of my mental health and my well-being compared to where I was at that time.

I’m glad that I’m in a better place now. I’m also glad that I had that summer to know what loneliness feels like and realize that it’s always better to reach out to others instead of curling up inside. This song represents the time in my life that keeps teaching me such an important lesson for anyone (but especially a naturally inclined introvert) to learn.