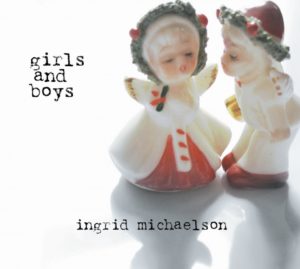 I’ve only ever gone through one breakup in my life. It was junior year of high school and the end of a two and a half year or so relationship. I was honestly okay with the fact that we were breaking up but I was mad about the fact that I didn’t have the courage to beat him to it a week before it happened. He did the breaking up and chose the phone method (arguably the most inconsiderate and cowardly way to approach these situations). I remember yelling at the receiver and then throwing the phone against the wall.

But this information is only important because of the song attached to it.

High school relationships are weird. The memories of mine are a blur. To be honest, I pretty much just remember a lot of emotionally charged text conversations that I had to pay for in $20 installments on my prepaid cell phone, making out on the couch in his parent’s basement while we “watched” Monty Python and the Holy Grail, and notes. So many notes. Like, notes that were scrawled across both sides of notebook paper. I wish I still had them just to have a glimpse back into the life of high school me, but I vividly remember ripping them up while listening to Ingrid Michaelson’s “Starting Now” on repeat.

Like I said, I am far from being a breakup expert, but to me this is the perfect breakup song. It captures all of the anger, confusion, and sadness surrounding breakups while also managing to leave you feeling empowered to continue life with confidence and independence. The song begins by placing you in the fetal position with Ingrid. She sings:

I want to crawl back inside my mother’s womb
I want to shut out all the lights in this room
I want to start fresh, like a baby in a sink
Scrub away all these thoughts that i think of you

That opening verse always punched me in the feelings. She managed to so beautifully capture the feeling of soul wrenching loneliness that comes in the first stages of grief. While the verses place you in the vulnerable emotions of a breakup, the chorus is completely empowering. She becomes decisive and declares that she is going to make a clean break. It’s her world now.

The brilliant emotional paintings created by Ingrid’s lyricism are framed by the accompaniment. The energy flow through in this song is very effective. The song begins with just voice and a simple acoustic guitar part for the first half of the first verse. The second half of the first verse adds some vibey electric guitar and 16th notes on the high hat, creating more tension. I am not a big fan of drums, but I have to admit that they have such a huge role in the energy flow of this (and really most) songs. When the switch finally comes from the 16th notes on the high hat to the more open and sustained use of the ride cymbal, it is obvious and is the main source for releasing the building tension in the song. There is a tease of release as she sings about having something to say to her ex but this leads back into another verse. We finally get a release when she gets to the channel and can finally say out loud that from this point forward, she is going to erase her ex from memory. The song maintains this balance between tension and release through the full 4 minutes and 52 seconds. There is never a moment that feels boring. You are either anticipating an event in the song or deeply touched  by a tender moment.

This was my breakup song. I think it holds up as a great song after almost ten years. Regardless, it will always transport me to that night that I sat on my bedroom floor ripping up notes from my first boyfriend, a sinking feeling in my stomach. This song gave me an outlet for my confusion and angsty teenage rage. It helped me reclaim “my world” and will always hold a special place in my heart.

Summer, Highland Falls (Live) – Billy Joel
I Can’t Believe You’re in Love With Me – The Hot Club of Cowtown