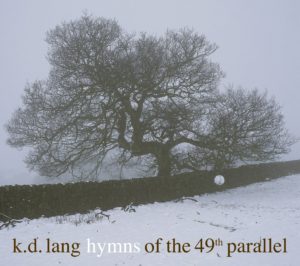 k.d. lang is a great Canadian singer-songwriter. She gained commercial success in the 80’s but remained connected to her roots in Canada. This album is evidence of that connection. She covers songs by Canadian writers like Bruce Cockburn, Joni Mitchell, Leonard Cohen, and this song by Neil Young.

Lang’s interpretation of the song differs from the recordings I’ve heard of Neil Young. Hers is more orchestrated. There is an eighth note pedal on the tonic that continues throughout the verses that gives her version a strong sense of expectancy. I think that’s a feeling I really enjoy when listening to a song. I want to feel like it’s taking me somewhere. For this song, it takes you into the chorus which has big open acoustic guitar, tight harmonies, and string orchestration. I also love how up-front the upright bass is throughout this recording.

The song sounds a bit like a love letter to Canada. The song opens with the line, “There is a town in north Ontario…” it’s assumed that maybe this is the narrator’s hometown. The song describes aspects of the town and the fact that thoughts of the place leave the narrator helpless. While the song could be specific to Canada, I feel that it reaches farther than that and digs straight down to the feeling of yearning for childhood or the past or a hometown. Those are the feelings this song stirs in me.

There is a town in north Ontario,
With dream comfort memory to spare,
And in my mind
I still need a place to go,
All my changes were there