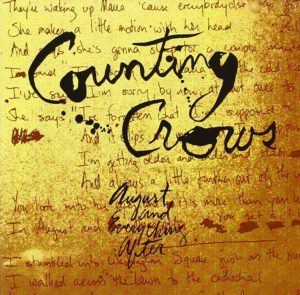 I’m sure I’ll end up writing about many songs off this album. It was difficult to decided on one to start with. I ended up just picking one at random. This song is interesting. It begins with a very 90’s drum beat that feels somewhere between a rock beat and almost second-line underneath Adam Duritz’s vocals. It takes almost a full 2 minutes to get to the chorus of the song. The verse is a sprawling, 2 section first-person story about a guy trying to appraise the status of his relationship with a girl. Basically, he can’t decide if it’s love or not.

I think that the point of the song (and this is actually a part of the lyric) is that love is an all-or-nothing sort of pursuit. It’s not something you can half-ass. Listening to this song (and really most of Counting Crows’ music) it definitely feels like he’s overthinking things, but I think that’s sort of the point. The band is definitely appealing to someone like me who tends to think too much and has developed neurosis and anxiety when it comes to social interactions. This music feeds into those insecurities. And it feels good to have that every once in a awhile.